I was a typical Kevin the teenager. I had a terrible attitude in my teens and my mantra was, ‘it’s so unfair!’ Other than having boyfriend’s that my mum hated, after giving up sport I didn’t do anything else. I no longer had a horse to look after and I wasn’t a member of any teams so I had no commitment’s and never had that feeling that I was letting people down. Weekends were mine to just to hang around with friends in the park or do some underage drinking in a local pub. This laziness continued on to university and well into my twenties, where the only exercise I got was lifting the TV remote or a pint of beer (seriously) or occasionally I would walk somewhere but only at a push. My bone-idleness stuck with me until finally I got my big butt out running one day and after meeting my now husband, because he played, I joined a hockey club. Now, in doing both these things I can understand and appreciate all the good things that sport can do. Obviously my past is exactly that, however I can see that had things been done differently, had I perhaps joined that school hockey, netball or running team, then maybe my teenage years and beyond might have been different. Not that I wish or can change things, however I believe had I been taking part in team sports or more group activities from a young age, then this might have carried on into my teen years and changed my attitude somewhat. 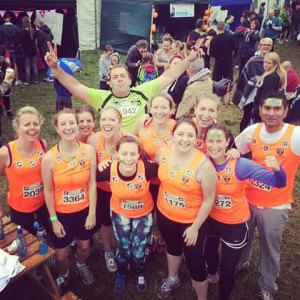 Now that I have a little girl, I often think of the sort of person I want her to become. I have many hopes and dreams for her of course, but one thing that I believe is, is that if she is involved in and playing sport, especially team sport from a young age, she will hopefully have instilled in her the core values that as a family, we will be teaching her too. Sport helps teach children lots of things, such as respect, honesty, teamwork, support, fair play, adherence to rules and an understanding of winning and loosing. I read this great article in the Telegraph online that quotes that, ‘Team sport, team activities and team challenges are as important to young people’s development and future success as any academic qualification. We must teach children to understand that we all make mistakes and that we are at our strongest when we show empathy and compassion to those around us. Equally we must teach them the resolve to come back from mistakes and the ability to learn from them so that we are stronger and better.’

I was incredibly selfish as a teenager, I never had anyone else to think about other than myself. I hope if Olivia is taking part in team sports then she will learn that sense of camaraderie and fun that comes with being amongst other children all doing the same thing. She will learn about supporting one another and that it is not always about her, there are others to consider too sometimes. Being part of a team can give you a great feeling, you learn how to work together as a unit. Yes, there may and will always be people better than you but you hopefully learn to accept that and work at what you are good at. These are all things I would love Olivia to learn about and experience.

I also hope that in being part of sport she will recognise the fantastic female role models there are, like Jessica Ennis-Hill and Kate Richardson-Walsh to name just two. These are strong women who excel in their sport and who show what dedication and hard work can get you. Kate Richardson-Walsh had her jaw broken by a hockey stick in the opening game of the Olympics 2012, however instead of rolling around crying like a footballer, after missing two matches she went on to captain her team in the final match which saw them win a Bronze medal. These aren’t women that you see falling out of nightclubs with their boobs or bottoms out. They aren’t pop stars like Miley Cyrus who openly smoke pot and wear tiny bits of clothing, not that I’m hating on Miley, I just wouldn’t fancy Olivia having her as an idol. These are sports women most definitely have a drink or two but it seems that it’s generally behind closed doors away from prying press eyes. They lead by example and that’s a great thing. These are the women I want my daughter to look up to. So back to my post title, is sport, especially team sport important for our children? Yes, I firmly believe that it is.

What do you think? Do you hate sport and because of this, do you not push your child to do any exercise outside of school? Or do you love it, and want them to do as much as possible? I’d love to hear from you.

6 thoughts on “Is team sport important for our children?”