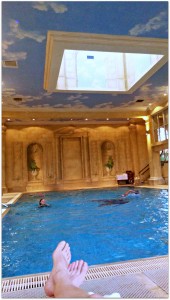 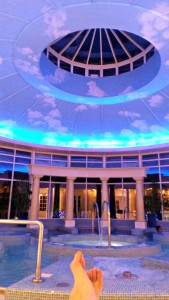 After much hydro-pooling, we were ready for more food in the shape of lunch. There was a great choice of different salads, chicken, salmon and mini puddings (YUM) obviously I tried to pile everything on my plate at once and couldn’t eat it all

We got a complimentary glass of fizz to apologise for the hydro-pool being closed, given to us by the Manager who was incredibly nice and couldn’t have been more sorry for the inconvenience. After lunch, we headed back to the Spa, and mine and my husbands ‘pet hate’ of people bagging loungers when they are off doing other things was confirmed. Everyone else there that day was clearly in holiday mode and had left their towels behind, taking up every lounger in site, this drives me potty! Quite rightly the spa quite rightly operates a policy whereby they remove towels from loungers if it looks like people aren’t using them, which is good. Once we’d secured some seats we chilled some more, refrained from checking our phones and even did a bit of head bobbing. We then we spent the rest of the afternoon in the, yep you guessed it, the hydro-pool. There were some lovely heated ceramic loungers which were bliss to sit on after a float around. This area was definitely the best bit about the spa. My only minor moan was that the outside Jacuzzi was rather tepid and with it being a cold day when we went, it didn’t make for the toasty experience it should have been, but hey ho. Another minor moan (I’m not on a role here don’t worry) was that the steam and sauna rooms are in the separate sex changing rooms so you can’t go in with your other-sex partner. That’s just the layout unfortunately and can’t be changed, but this was a shame as that is part of the experience if you go somewhere like this with your husband. I have to add though that both the steam and sauna rooms were lovely, blissfully hot, clean and with plenty of water available. 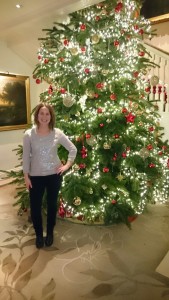 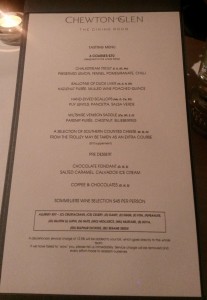