OK, so I haven’t done a recipe post for aaaaaages, not since September would you believe! SO now is the time. This is a really easy recipe that I found in the Lean in 15 book by Joe Wicks. Now, despite not actually following any of his fitness type stuff, some of his recipes are really great for quick, go-to mid week meals, especially all of his stir frys, and this is one of them. I tweaked this particular version a bit and ended up adding quite a lot of extra vegetables (read as: I panicked thinking we wouldn’t have enough), which you can easily choose to cut out, and I chose to use courgette noodles instead of adding rice. It was incredibly filling so a good meal to make if you’re famished or hangry and need to eat NOW. It honestly took me no more than 15/20 minutes. 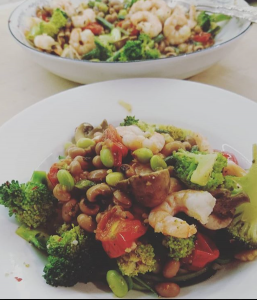