OK so this post is a little late, a year late in fact. I’ve no idea why I didn’t write this at the time *shrugs shoulders* I think because Olivia went straight to school when we returned from this holiday, everything just snowballed from there and before I knew it, eh, it’s September again?! It’s safe to say this post got well and truly parked. However I think I’ve been spurred into writing as we had a ten day getaway to France this August, just the three of us and whilst the sun shone, we ate well, drank delicious Rosé and enjoyed the pool at our little house, ten days altogether with just the three of us was too intense. It was too full on with Olivia 24/7 and for her too, she got bored with no other kids to play with. Neither me nor my husband had any much needed, ‘down time’. We discussed it a lot on the last day and both realised that going forwards, we need a holiday with a kids club. Which reminded me of our lovely stay at Messini Beach last year.

So rewind a year and we took full advantage of the fact that Olivia didn’t start school until late September and decided to go away. After much internet searching, one option that kept popping up was a Neilson holiday in Greece. I’ve heard about Neilson before as a good friend who I play hockey with swears by them and after much deliberation, we settled on their Messini Beachclub site. A minor concern we had about this hotel before we booked was that it is quite isolated. Bar a sister hotel next door which is adults only, there are no shops etc nearby. There are one or two restaurants about 15/20 minutes walk away (30+ with a small child) and there is a Lidl about a ten minute taxi ride, but that is it. Generally we like the option of having places to walk to (to erm, buy booze and snacks for our hotel room), but after speaking to Neilson direct, to a lady who was incredibly helpful and who had been to the site, we decided that because we were only going for a week, this didn’t matter too much. We paid £1,993 in total and had a Double room with Club board (Club board includes breakfast and lunch every day and four evening meals per week) 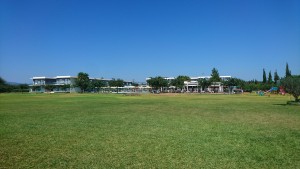 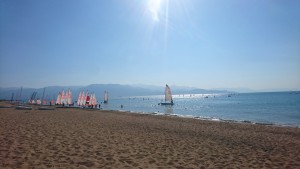 Both flight and transfer was pretty painless. From the tiny Greek airport to the hotel it’s a 20 minute bus ride. The whole travel experience was quite funny as it’s a chartered flight, so you’re travelling with the families you’ll essentially be holidaying with for the next week or so. I quite liked this and you find yourself having a good look at everyone on the plane out there, wondering who you’ll end up chatting to.

The hotel is nice and clean, with a decent size restaurant and outside terrace area. There is a small shop on site selling various (over-priced, standard) bits for the pool/beach etc and there is an outside bar and seating area at the far end of the pool, with a volleyball net and a small children’s play area.

We found the restaurant to be busy during the standard breakfast, lunch and dinner hours but not too bad just outside of these times i.e. really busy at 9am but not too bad at 9.30am. But no matter how busy the staff could always fit us in somewhere and were really helpful. They also have a table sharing option for those travelling alone, or for say, older kids who don’t want to eat with their parents. Food wise, I can imagine after a while it can get repetitive but for a week it was fine. There was generally a theme each evening (local, Curry, Italian etc) and we felt there was plenty to choose from. There were lots of of breakfast options and a decent coffee machine too, although perhaps the queue for this is a pain in peak times. From memory the gluten free options were pretty small. One thing to note is that when we go away on holiday Olivia is a total nightmare with food, she eats nothing but we found she’d try a few things here, muffins, bread, salami, plain pasta and spaghetti bolognese, you know, all the good stuff. We ate out one evening at one of the closest restaurants to walk to (which took us about 20 minutes or so to get to with the small child) and had some delicious fish/mezze type food, but opted to eat at the hotel most evenings for ease (read as: Because of Olivia and her difficult eating, rolls-eyes)

Our room was a double room and it was pretty basic, with the bathroom area and shower being in the room itself. The toilet was thankfully in a separate section, phew! I didn’t like the open bathroom/bedroom design, and the shower could’ve used some TLC, but this was a small point really. We had a comfortable (very important for us) decent sized double with an extra camp bed style bed for Olivia alongside ours. The curtains were good black out ones and we had a nice little balcony facing the end of the pool. 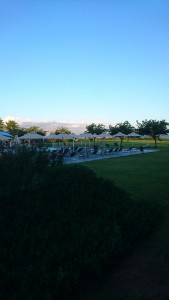 The main pool was quite big with a good sized square kids pool. The water temperature was fine, no squealing on entering either pool. It was so lovely in fact that Olivia spent most of her time in the water and subsequently learnt to swim minus arm bands, which was wonderful to see. Beach towels were in our room and most importantly there were plenty of sun loungers which didn’t seem to get taken up, something that bothers us a lot. 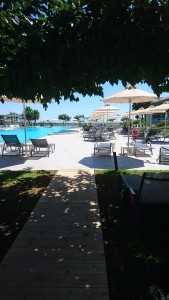 On to the pièce de résistance. The kids club was FANTASTIC, honestly it blew us away. Olivia was in a group Sea Badgers which was for 4-5 year olds. Those in charge are called Nannies, and they were all mostly UK students taking gap years etc. All incredibly bright and friendly. Every evening the Nannies write on boards the activities for the next day so you can see what’s going on and perhaps work out what time to drop your kids off. They do some early drop off sessions and at least one or two evenings a week where they have the kids later and do a sleep/film club. You could also opt for kids to eat lunch or have tea with their group.

We generally dropped Olivia off after breakfast and collected her after lunch most days. She is a pretty confident kid but as it’s a small site she’d often clock us and would have a little wobble. Because of this we sometimes had to check her out a early which was fine but actually we found that most times she saw us, the Nannies were so brilliant in dealing with errant kids running off to their parents, they herded them back with relative ease and generally she’d often she’d happily go back to her group. For those wanting to duck out of their kids view, this is the great thing about the timetable each day i.e. you know if they’re at the beach or inside, plus each group has a song which they sing as they leave the main Kids Club building (I assume to give the parents lounging around a heads up?!) so you hear them coming! She did SO much though and thoroughly enjoyed it all, despite some grumbles. She played tennis, went kayaking, sat on a massive SUP board, jumped in the sea, went sailing, and so much more. All the water activities were completely supervised, the Nannies are all competent swimmers/sailors etc and all the kids wear life jackets. At times my husband and I would watch the Nannies with their respective groups and they always looked like they were enjoying themselves, even the guy pushing babies around in a buggy all afternoon doing loops of the hotel grounds looked happy and the ones who had the older kids groups looked so entertaining, we were really impressed with this. We’ve never experienced a kids club like this before and we felt completely safe and happy leaving Olivia with her Nannies everyday. 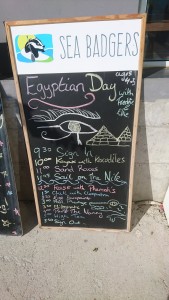 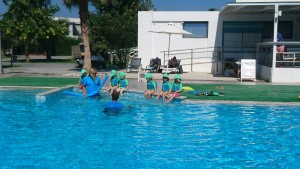 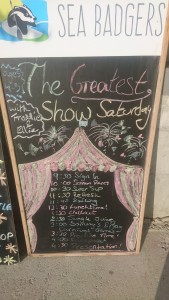 Activities wise, my husband can sail and went out a few times and I went out with him too. We tried SUP boarding (I fell in a lot) and Kayaking. We’d planned on doing yoga but didn’t, great plans and all that, but my husband did some social tennis which he really enjoyed. I did horse riding which was good but we weren’t allowed to do that much bar trotting and as someone who can actually ride this was a little frustrating, but hey ho.

The beach was pretty much just for Neilsons and is literally a five minute walk, if that from the hotel. It was clean and the sea was lovely and clear but there wasn’t much to see bar sand and the odd few fish. There were big ants running around on the sand so we were warned not to take food or sweet drinks down there. The weather was incredible, lovely and warm but it’s worth noting that a decent breeze would pic up mid-afternoon everyday which was pretty strong on two days I’d say, blowing things around a bit by the pool area, but it was cope-able and great for those out at sea! Something we found useful was that you could borrow the kiddies float vests to take down to the beach which was really handy for Olivia to bob around in the sea.

They have on site photographers taking pictures of everything during your stay. You can check in every day on a computer and see what’s been taken and you have the option to buy these pics at the end of your holiday. You can also have a photo session for an hour as a family. We opted for this and have some beautiful photos from it (despite Olivia being a complete toad during). The package cost us between £120/140 and was totally worth it. 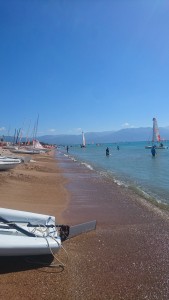 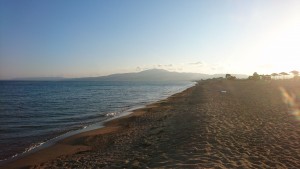 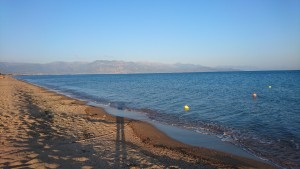 Some small negatives to note would be that we had been told we could use the adults only hotel pool during the first night check in meeting (obviously without the child), but were then told over the phone by that hotel reception that we couldn’t, so perhaps that needs to be clearer. As I mentioned, I didn’t like the open plan rooms with the bathroom essentially being in your bedroom but I guess that can’t be changed! We also spent a fortune on alcohol in the hotel (oooh those afternoon beers are SO good), again the isolated nature of the hotel was the problem here but we knew this would happen! And not a negative at all but for us, a week was enough. The combination of the location and unless you’re a real water sports buff then there isn’t much else to do at the site – obviously you can pay for excursions etc but to keep the cost low some (us included) might not want to do this.

The journey home was super easy. We pre-booked lunch packages via the hotel so got little bags with sandwiches etc (all a bit overpriced but you really don’t have much choice!) There was a small shop at the airport but really not much else. The whole thing with the chartered flights again made it all really easy I felt.

We would definitely use Neilson again. We came back completely rested and this was all down to the amazing kids club! Next on our list is their Sardinia site which is in a bit of a better location so we would love to try there.