One big thing I want to promote here on Its Mostly Okay is sport and it’s positive effect on not just adults, but children too. I wrote a post recently about how my lack of sport, especially team sport when I was a young, lead me to be lazy and lax throughout my teen years and well into my twenties. Sport fell off my radar when I hit my late teens, not pushed to do it anymore I stopped it altogether. I’m certain that had I been more active and engaged when I was younger, then I would have had a different attitude towards many things as a young adult, especially diet and lifestyle. Liz Sully, a Fundraising Manager at Women in Sport got in touch with me recently to let me know about their ‘What If’ campaign. A positive and empowering campaign, aimed at changing the way young girls view sport. ‘What if, instead of growing up only seeing images of models and make-up on the pages of magazines, young girls saw sport portrayed in a way that made them want to be more physically active?’. This resonated with me having a daughter myself, I would like her to grow up not just seeing images of un-realistic girls in magazines or on television, with flouncy hair and ‘pretty’ makeup, but strong, sporty girls who show that anything can be achieved and who show that being active and sweaty is totally normal.

The #whatif campaign requires support and backing, Liz explained all to me. 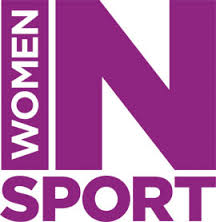 1. Hi Liz! Can you tell me a bit about yourself, your background, and how you came to be working at Women In Sport?

I’m in my thirties now, but as a child I was always very active. I swam, did gymnastics and competed in cross country, all with the support of my wonderful parents. When I started working and studying at University, sport dropped off my radar unfortunately, and it wasn’t until my late twenties that I re-discovered by love of running. It was that, along with my passion for wanting to support the fight for gender equality that led me to Women in Sport. I’d previously worked for a domestic violence charity, and heard first-hand from survivors who had found playing sport to be a huge help in their recovery, and that really opened my eyes to the benefits that playing sport could have on women’s lives.

2. Tell me about Women In Sport, and what it aims to achieve?

Women in Sport is a charity that is working to transform sport for the benefit of every woman and girl in the UK. It was founded 31 years ago, in the year that the women’s marathon was included in the Olympic Games for the first time. Since then, women’s sport has made its way onto the public agenda, but the playing field is still not level. Women in Sport aims to increase opportunities for women and girls to benefit from playing, working and leading in sport, as well as campaigning for increased media coverage and sponsorship of women’s sport.

3. How did the idea of the #whatif campaign come about?

We wanted to great a campaign that caught the public’s attention, and that resonated with people’s own lives, or those of their daughters, sisters or friends. We asked some of our supporters what they thought the most important issue was that Women in Sport should be tackling, and their feedback was that we needed to work with media to change the way that teenage girls and young women view sport, so that they see it as something for them. 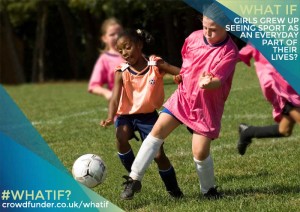 4. What is the campaigns’ main aim?

The campaign’s main aim is to persuade media targeted at girls to feature more sport, so that it becomes normal in their worlds and so that they are exposed to female sporting influencers who will inspire them to want to be more active.

5. What will the money raised via Crowd Funder, do?

The money we raise will help us to undertake research into media coverage of women’s sport and its impact on girls – we know that some women’s media have been doing great work in increasing their coverage of women’s sport, but this tends to be targeted at adult women. We want to look at media targeted at a younger age group, to see the extent to which they are exposed to sport at a time when the media plays a big role in influencing how they see the world. Our research will allow us to build a compelling case for change that we can use to persuade major UK media outlets to promote a positive and responsible image of women’s sport.

6. Why do you think it is, that girls end up giving up sport when they reach their early teens?

Our research has shown that whilst girls and boys participate in a similar amount of sport and physical activity when they are younger, a decline in girls’ participation levels begins to occur before the transition to secondary school. The reasons for this decline are many and varied, but include not liking the activities on offer in PE, feeling like their bodies are on show when they exercise, and feeling like their teachers only pay attention to those who are good at sport. There is also a feeling amongst some girls that getting sweaty is unfeminine, and, at a time when girls are thinking about their future careers, PE often isn’t seen as an important subject for them to be good at.

7. What exactly is it, that the media are doing to hinder girls continuing with sport?

It isn’t so much what the media are doing that is a problem, rather than what they are not doing. When we were researching the campaign we looked at a number of magazine titles that were aimed at girls, and sport was completely invisible on the pages. There was reference to exercising, but this was framed in a way that focused on appearance and fixing ‘problem areas’ rather than all the other benefits of being active, such as improved mental and physical health, making friends, increasing their confidence and building their skills. Celebrities, models, pop stars, actors and vloggers featured heavily, but there were no mentions of sportswomen at all. 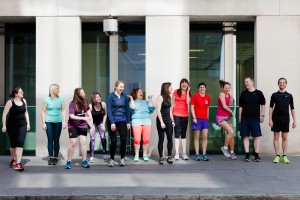 8. How can you make the media change what they doing?

We want to start a conversation with girls’ media, to show them that a growing number of their readers genuinely are interested in sport, and that they have a role to play in nurturing this and creating content that reflects their interests and encourages them to build a sporting habit for life. We want to explain to the media how sport can help to tackle issues that affect their readers, such as lack of body-confidence, self- esteem and mental health issues, and show how, by featuring more women’s sport, they can make a real impact on girls’ health and well-being.

9. Do you think schools’ also aren’t helping girls progress in sport as much as boys? Do they need to be more involved?

There is some great stuff happening in schools to help girls progress in sport. Women in Sport are currently working with the Youth Sport Trust through the Girls Active programme, which offers a flexible action planning framework to help teachers and girls work together to address the issues that prevent girls from enjoying PE and school sport. We’ve also recently completed our Changing the Game for Girls: In Action programme, which saw a number of schools and teachers really taking increasing girls’ involvement in sport to heart. There is much more to be done though, and it is a priority for us to continue to work with schools to help them understand the needs of their female students and tailor their programmes for PE and school sport in a way that engages and empowers them.

10. Do you have any statistics of the ratio of girls vs boys in sport?

Girls become less active than boys from the age of 8; by 14 years old, only 12% girls meet the official guidelines for physical activity – roughly half the number of boys at the same age.

11. How can people help support the campaign?

People can support the campaign by going to www.crowdfunder.co.uk/whatif and making a pledge. Any amount, big or small, will make a real difference and will help Women in Sport to campaign for more visibility of women’s sport.