Chatting to a fellow mum at the nursery gates the other day, we got onto the topic of food and cooking our evening meals. As always, this conversation stemmed from talking about the weather, which we do love to talk about here don’t we. When the leaves start falling, we turn to hearty and wholesome dishes. But if you’re like me, I always tend to cook the same things, beef stew, chicken casserole, lasagne etc, I’m a bit of a sucker for the classics. It was this mum that recommended I try a Gousto box, quoting it as, a ‘bit of a lifesaver’ for her mid-week meals. This sounded right up my street. But who or what exactly are Gousto? Well, it was started by two friends, Timo and James back in 2011 when they founded themselves frustrated by the lack of time to cook in the evening and by the lack of decent supermarket ready meals (sounds familiar). They came up with the idea for recipe boxes, first selling at market stalls before setting up their online service. They source fresh produce from local farms in Lincolnshire, and the majority of ingredients come from the UK. They exclude additives, preservatives and chemicals, opting instead for wholesome, natural goodness and their meat is 100% British. Sounds good eh? 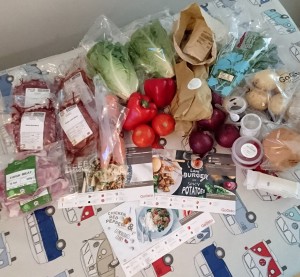 Ordering and choosing was pretty straight forward. The recipes change weekly so you just check online and make a selection from twelve recipes, which include meat, fish and vegetarian options. I opted for: Chicken, red pepper & lemongrass curry, Lamb burger with spicy potatoes and a rich, open beef lasagne with basil. Yum. My box was delivered on a Monday and despite not being in, the contents were kept nice and cold with freezer pouches and a covered wool linning. The cooking bit was ridiculously simple. Everything you need is provided in the exact amounts, you just need to double the amounts if you are cooking for four people, which handily the recipe cards remind you to do (that’s the sort of thing I’d forget)

First up was the chicken curry. The recipe called for you to brown the chicken in a frying pan, then oven bake it for fifteen minutes. Because this meat was thigh meat, cooking it in the oven made it tasty and crispy, it really enhanced the flavour. This wasn’t like any Thai curries I’ve ever cooked before, it was so much more tasty and creamy, honestly, this is a keeper to be made again. My only difficulty was with the lemongrass stalk, but that was a personal technical error rather than an instructions error! 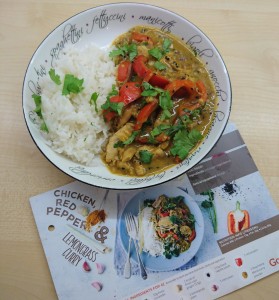 Next up was the lamb burger. I made this on a Wednesday when I have hockey training in the evening, so I’m always after something really simple and quick to cook and eat before I go. Despite peaking too soon with the brioche buns (they went a bit soggy) this dish was enormously tasty and filling, I can’t describe how delicious the tomato chutney was! I added some halloumi that I had rattling around in the fridge and that made for a nice addition. 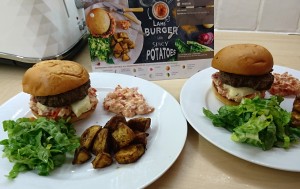 Last but not least was the amazingly quick lasagne. This was quite possibly the tastiest version of this dish that I’ve ever had, I can’t big this up enough and I love that it was a spin on such a classic recipe. The flavour was as the title said, rich, and washed down with a glass of red made for a perfect friday night dinner. I made this in thirty minutes (okay it says twenty on the recipe card!) which given that a normal lasagne can take about forty-five/fifty minutes means this can be a great, go-to mid-week dish. I added some guacamole, but a simple salad would work just as well. 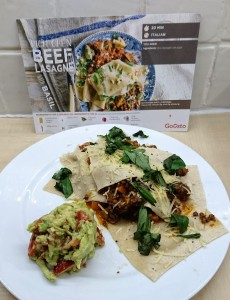 Did we have a favourite dish? No, actually neither my husband or I did, we both thought that all three recipes were excellent and would be made again. There was plenty leftover, which my husband took to work for lunch, giving everyone in his office ‘lunch envy’. And it was great to try three new recipes that I’ve never cooked before. And what did I actually think of the box? I thought it was great. The prices are good value for a start. For two people, a three recipe box is about what I pay for that amount of meals anyway. You also don’t have to pay a subscription or joining fee, delivery is free too and the quality of the meat and vegetables was really good. Win all round. It was great to know that for three nights out of my week, I didn’t have to think about what to cook for dinner.

The only thing that could possibly be improved on, was if Gousto could reuse/collect the box, along with the wool lining afterwards. This isn’t something they can do at present as they use an external courier, however you can obviously recycle the box, you can put the wool in your garden waste/compost, and you can keep the ice packs handy for any sports injuries (which there are always lots of in my house) This is a really minor thing though, I will be using Gousto again

Thank you to Gousto who sent me a box to review. All words and opinions are my own.

One thought on “Simple mid-week cooking with a Gousto Box”