Being a mum is a whole load of swings and roundabouts emotions. It’s a constant up and down from the moment you have your baby. A lot of people suddenly have an opinion on your business. It’s like the world now has the right to chip in about how you adult your children. And what with being judged, there’s also us judging ourselves. With Social Media now there’s a lot to compare ourselves too. You can’t but help look at that ridiculously smiley, perfectly edited family on Instagram and wish your child would just bloody well sit still for a photo, wearing those hilarious comedy glasses you bought. Social Media can at times make us think that our lives aren’t pastel enough, colourful enough, or fun enough!! Argh!! You can also (without meaning to) spend a lot of time comparing yourselves to other mums that you meet, at playgroups, softplay or at the school gates. This post is about not being that mum who seems to have it all. 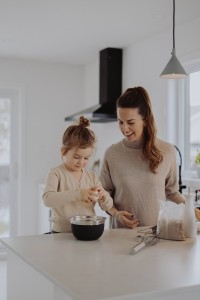 It’s OK not to be the mum who can wear white jeans. I mean, it’s just ridiculous anyway and surely you’re inviting little people to put their dirty hands on your legs  (I know it makes me want to wipe something on them anyway) I, for one am particularly clumsy (it’s in the genes, thanks mum) so me, plus a toddler, plus white jeans are a big fat no. It’s totally OK to not be that mum back in your skinny jeans six weeks after having your baby. That’s just not normal so don’t stress and carry on eating cake. It’s also OK not to be that mum who has a flat stomach. Some of us have a tummy that wobbles, a baby came out of there, remember? And it’s OK to not be that mum in immaculate clothes. Sometimes the toddler wipes their nose on your arm before you leave the house, it adds to the look. Mine likes to stealth swipe her nose on my leg when I’m not looking, the bugger (or should that be booger)

It is OK to be the mum who isn’t that great at producing picture worthy teas for their children. Sometimes, without thinking their tea might look a bit beige, it happens, it’s OK. Also, occasionally you might forget what you gave them for lunch and give them the same for tea (*looks around shiftily*) But remember, they really don’t care, they’re fine and probably wouldn’t eat the organic casserole you spent hours slaving over anyway. It’s also OK to hate baking with your child. Baking with Olivia is akin to some sort of insane army mission, with flour everywhere (usually in her mouth) and butter mines on the floor.  I despise it. It’s OK to hate doing craft with your child, to slowly back away in fear when you see they’ve got the paints and glitter out at playgroup. It’s also OK to not enjoy ever second of every minute being with your child. It’s hard work parenting and if you’re with them all day, every day, then it does get a tad repetitive. Our day goes something like this, ‘OLIVIA STOP DOING THAT, GET DOWN FROM THERE, PUT THAT DOWN’, and so on and so forth until bedtime.

It’s OK to not be that cool mum. You know the one I mean. The one with the funky changing bag, dungarees that don’t make her look like a midget /and or pregnant, blow dried hair, natural makeup including even eye liner (an impossible task) and sunnies. Damn her. Yes it would be awesome to be able to pull that look off but hey, we’re stuck with what we’ve got (good pep talk eh) and toddlers and coolness don’t really go hand in hand. At least, that’s how I’m selling it to myself. It’s also OK to be that mum who breaks wind occasionally at inappropriate times (don’t judge me) A few things have loosened ‘down there’ and I’m not ashamed to admit the odd trump pops out when least expected, like when bending down in the supermarket, putting the kid in the buggy, walking down the road, coughing etc. It happens, it’s OK (I think) And finally it’s OK to be the mum who laughs hysterically when your child gets stuck in the washing basket. Just make sure after about five minutes you help them out. Just remember to be yourself ladies.

3 thoughts on “Its OK Not To Be That Mum”