After a planes, trains and automobiles style journey to The Royal Albert Hall (because of course, it was the one and only night it decided to snow which meant the trains went up the spout) Me and the Mr arrived late, somewhat stressed and ready for a glass of wine. Which saw dry January go out of the window. Oh well, when needs must! As we settled into our seats I wasn’t too sure what to expect from Amaluna, my first Cirque Du Soleil show. The Mr had been to one in Vegas and described it to me as, ‘a bit like a posh circus’. So could I expect cannon firing and tight-rope walking? Well, not quite but essentially, a ‘posh circus’ is a good description of what Cirque Du Soleil is. But as I soon saw for myself, there is much more to it than this. 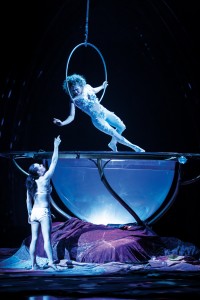 The night I went along to watch, Cirque Du Soleil had partnered with Oxfam and for every Oxfam ticket bought, 70% of the value was kept by them to put towards fighting extreme poverty and supporting women’s rights around the world. The show features a nearly all female cast and promotes strong women, femininity, rebirth and balance. The story is set on a mysterious island, and starts with a ceremony for Queen Prospera’s daughter Miranda who has come of age. A group of young men wash up on the isle, igniting an epic love story between Miranda and her suitor, Romeo. This is the basic story outline, but there is a lot of great filler material in-between. 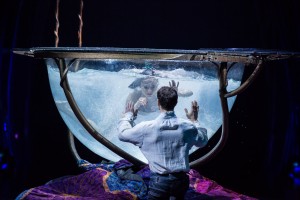 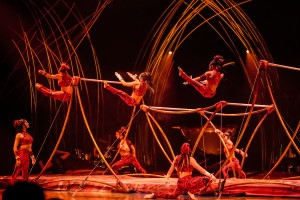 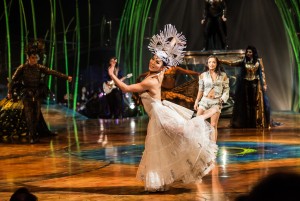 There’s no speaking throughout the performance, but a few characters pretend to talk by making various silly noises (I thought it was French at first, but I had had two red wines by this point) There is music to match the acts, rock guitar solos, drums and some emotive cello action. One of the main characters, a rather rotund, rosy cheeked maid of sorts takes a fancy to the captain of the ship wrecked ship and a romance blossoms. These are the only two characters who ‘speak’ and several scenes are them chasing each other about, almost in a Benny Hill style. Most of the other scenes involve impressive acrobatics, and oh my when they begin, they are truly mind blowing. 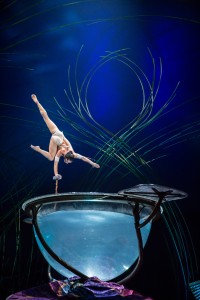 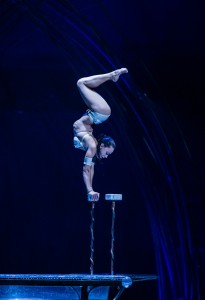 A lady in blue unfurls from the roof at one point. She took my breath away as she held onto a suspended ring, flipping, dangling and folding herself with ease. My favourite bit was with the main character Miranda who displayed amazing strength as she balanced on her arms, swapping back and forth on the edge of a giant bowl of water. Wow. These scenes had me whooping out loud (three wines down by now). A few scenes I found a little on the slow side and one in particular had a sound track featuring lots of heavy breathing which made me feel a tad uncomfortable, parents take note, but as a whole it was excellent, I’d give it a 9/10. This is a great family show and would be good watching for any budding dancers, gymnasts or ballet enthusiasts. It’s on until the 26th February 2017. 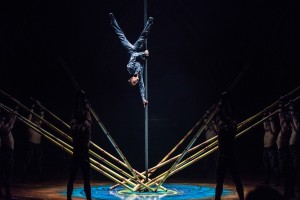 I was invited to view Amaluna for the purpose of this review. All opinions expressed are entirely my own.