Something I’m really aware of these days, is the amount of meat and fish that we eat as a family. Trying to cut back has been on my radar for a while now, it’s something that I tend to dip in and out of rather than commit to fully. However, recently I’ve re-connected with an old acquaintance on Instagram and have been following her and her family’s’ conversion to veganism with real interest. Antonia’s posts are a reminder to me to really think about what I eat. Whilst I don’t think veganism is for me right at this minute, it’s core values are things that I really would like to recognise and follow fully at some point in time. I do think it’s wrong the way animals are treated, I do believe mass farming animals contributes to our destruction of this planet, I do feel that drinking dairy milk (as adults) is a bit odd, I do feel that it’s been indoctrinated into us that we need meat in our diet, I do believe that we eat too much meat as a nation and that plant based foods are better for us. And I do believe that it would be better for our bodies all round if we cut back on our meat consumption. 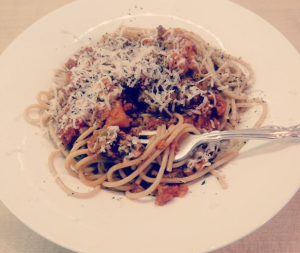 Taking the IVF plunge (although we haven’t actually got to a whole IVF cycle yet, that’s another post) really made me think about what I eat everyday. Not that my diet isn’t fairly healthy anyway (lets ignore the white baguette sandwich and hula hoops that I’m eating right now), but I’m supposed to be eating lots of greens, lentils, vegetables, beans etc. Thinking about this, I decided that I wanted to try and eat less meat, stripping away my basket staples like chicken, mince, bacon, replacing them with Quorn and other vegetarian substitutes (despite the husbands grumbles). A couple of vegetable based dinners every week could only be a good thing and certainly something we’ll be doing going forwards is Meat Free Monday (#meatfreemonday) A good spaghetti Bolognese is one of my favourite meat dishes, I found this pretty decent vegetarian version. I’ve amended it a little, here’s my recipe: 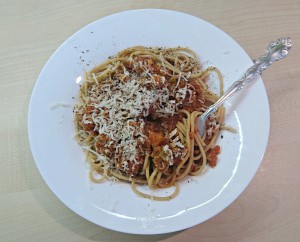 This was really tasty and a decent replacement for a meaty Bolognese. Oh, and if you’re interested, Antonia has written two really great posts about becoming a vegan, here and here.