I first ‘met’ Sunita, writer of Lucky Things blog via Instagram last year. Details of exactly when are a little hazy in my mind, a bit like a boozy first date. Shortly after meeting (I use this term in the ‘online’ sense) Sunita invited me along to an event she was hosting in London. It was apparently going to be a small, informal and friendly, with a fabulous Weleda arm massage thrown in for good measure. I didn’t know anyone else who was going, and having been to big blog and smaller meet ups before, I was a worried about feeling a bit lost. The big events I’ve been too, I’ve found to be rather impersonal, as those who already know each other use it as a chance to catch up (quite rightly) but the problem being that they tend to stick in their set groups (what’s a group of bloggers called? A Click perhaps, with all that phone and keyboard tapping?) And a few other more low-key, supposedly super friendly and pressure free meet ups that I’ve been to, I’ve found to be exactly what they were claiming not to be. So would going to Sunitas’ event leave me feeling on the outside? 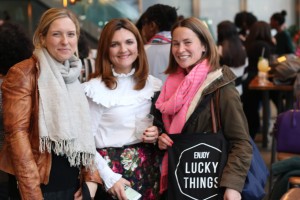