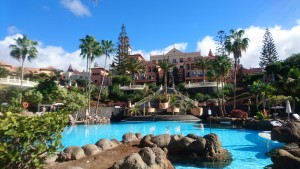 I don’t need to tell you about our holiday as it mostly consisted of eating, drinking, pool and beach action, so I’ve broken down the bits I think are important to explain what the hotel was like.

Hotel
Just twenty minutes from the airport (if that given your driver) it’s an easy hotel to get to. It’s quite confusing when you first arrive, I can’t quite describe how enormous the site is. The reception ‘area’ is in a huge conservatory-esque building, with birds cheeping away and all the staff are in (what we assumed to be) traditional Spanish outfits. You need to spend an hour or so on arrival, wandering around, placing yourself and things around the site (we did it on the first day, then saw equally confused guests doing the same later on) Once you’ve done that then it’s really easy. One thing to note is that because the site is big, there are quite a lot of steps, with one enormous set right in the middle of the hotel but there is also a winding track for mobility scooters and buggy’s and to be honest we often took this route as it really was no different and sometimes, the steps just hurt our legs! At the bottom of the site is gated access to a promenade, decent shops and Playa Del Durque beach, which was a great to be able to take the kid to every day. All the hotel staff we encountered literally couldn’t do enough for us during our stay. Everyone was helpful, friendly, and they were all brilliant with Olivia, she did pretty well for chocolates and lollies during the week! Entertainment wise, there’s always something going on the evenings. They have a kids disco either at 5 or 9pm, so we did that a few times but they do like the children to follow instructions and with the lack of other children and Olivia’s inability to pay attention, this didn’t always work (i.e. they’d wind it up after 3 songs) We watched a magic show one night and they had various dance shows etc. Basically there’s enough to keep you occupied in the evening. 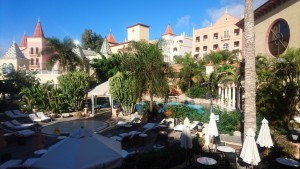 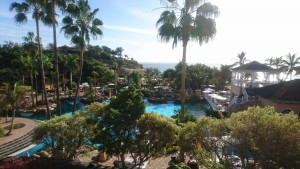 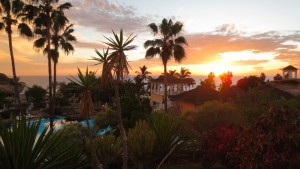 Rooms
We had a standard hotel room in a great location right near reception, overlooking one of the top pools and an outside seating area. We had plenty of space in the room itself for the three of us, our bed was so big we couldn’t actually touch hands in the middle. We had a decent balcony area with two loungers, where we spent a fair amount of time in the early evenings. We took blackout curtains with us but didn’t need to use them as the curtains were so thick. The bathroom areas are pretty ‘open’, think slatted bathroom pull doors (which the kid would always stick her head through when I tried to have some privacy) and glass toilet doors, so you may have trouble if you’re not a family who can laugh about toilet matters! We did have to speak to reception after day three as despite our rooms great location, it was near all the evening entertainment, so when you have a child and sadly all go to bed at 9/10pm, we found we were kept awake the first few nights with loud music. However, that said, firstly reception were amazing and did show us two other rooms but we decided to stick to our original one, and secondly, all the entertainment finishes at 11/12, so it was completely bearable in the grand scheme of things.

Food
From memory there are about ten restaurants on site (we got lost trying to find one, one night) so there is vast amount of food choice available. There was a chocolate-bloody-fountain for goodness sake at the breakfast buffet (diet out the window!), which was so vast we had to do four laps on arrival to take it all in. We tried pretty much everything when we were there and had a babysitter one night to dine in Las Aguas, the fine dining restaurant. We were happy with everything we had and in theory, even the fussiest of children should find something to eat here, although we really struggled with the kid, she was a nightmare! I think this is just a holiday thing though as she did this when we went to France, basically ate like a tiny bird. She would only drink Nesquik Strawberry milk at breakfast, and would only eat bread rolls, tiny bits of cucumber and the occasional bit of fruit. It was a really challenge eating with her, but that’s just toddler prerogatives, right?! 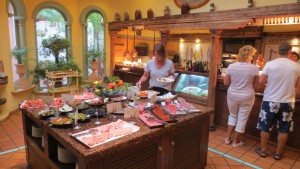 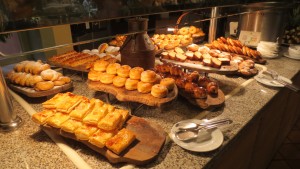 Kids Club
Ah, the Kids Club. We’re new to this sort of thing but this was the main reason why we booked this hotel as we wanted to have the option of trying it, and they took kids from the age of three (the kids is 3.5) We were both quite nervous about sending her off because obviously you’re in a different country, you don’t know the people you’re leaving your child with and there is always a worry about a child going missing. We dropped her off in the morning together and both felt hugely reassured to see that the club building is well within the hotel itself (and it was a stones throw from our room) with a gated outside area and a door to buzz people in and out. Olivia was the only child there when we dropped her off (a downside to holidaying off season) but we left her in the capable hands of a lady called Gemma (and on another day, Michaela). This really was a great option for us personally, as it gave us some ‘down time’ to sit by a pool and read, in silence, amazing! And Olivia got to do loads of fun stuff, it really was worth it and to be frank, she needed the distraction from just the two of us otherwise she gets incredibly bored. A huge thumbs up for the kids club. 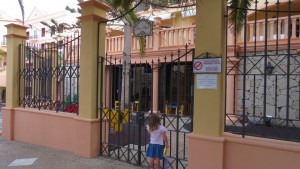 Pools
There are five pools, two heated at the top of the site nearest to reception, a heated small circular kids pool, then two big salt water pools at the bottom of the site. Salt water sadly meant freezing although I can imagine in the height of summer they are delicious to jump into, which was a shame because they looked so inviting! I believe the hotel operate a ‘no bagging loungers’ policy, but they weren’t enforcing that when we were there, which wasn’t an issue as there was plenty of space. The kids pool is quite small but was still perfect as you could sit on a lounger and watch, and you do have the option to take kids into the bigger pools, which we did a few times (the heated one obviously!)

Beach
Having access to a beach was something high on our hit list for going away with the kid and this hotel really ticked that box. You can take towels out with you and you’re on the beach in seconds. We opted just to sit on the sand but you can pay for loungers. The sand is black and the sea was a but chilly but not so much so that we couldn’t all swim together. It’s a blue flagged beach which means it’s clean and safe for swimming. They had two lifeguards that we saw and you can swim in-between the obvious flags. When we arrived the waves were a little big for Olivia and she wasn’t so keen on swimming, but on day three the waves were perfectly small and we had her swimming out with us in the water. 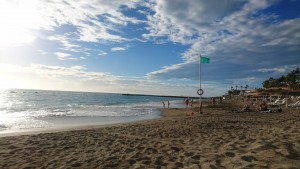 Spa
There is an onsite Spa, which we opted to try out on a Sunday when the weather was cloudy. You get a buggy to take you down to the spa, which is a novelty in itself. It cost about Fifty Euros for two of us and we pretty much had the place to ourselves. There are decent sized changing rooms, loads of loungers, a steam room, sauna and huge hydro pool. The only downside being that the pool is salt water which meant that it really was too cold to be in for more than a quick five minute blast, which was a shame as we do love a hydro pool. As said though, I’m sure in the height of summer its perfect. This aside, we steamed and sauna’d ourselves as much as we could, and sat and read for two hours, and that was nice enough. 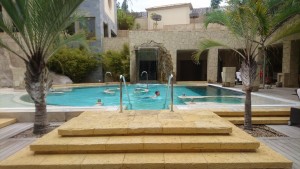 Area
The area we were in is called Costa Adeje. Right outside the hotel along the promenade are a few restaurants, a shopping centre and further up and along, a second bigger shopping centre so there are plenty of amenities available.

In all, a great hotel and we had a lovely week away. For Olivia and her age group, swimming, beach and kids club was enough although I do wonder what else older children would do (above the age of 12/13 perhaps) but I guess that’s when you do more things off site, excursions etc. Would we ever go back and would we recommend it to friends? Yes, definitely.