When my husband and I decided to try the IVF route, we always knew that we would need to fund it ourselves. Having had one natural daughter already, despite struggling with Secondary Infertility we were not (are not) eligible for any treatment on the NHS. We are lucky in that, we have been able to pay for ourselves to date, but having only had one fresh round and two other versions of IVF, our bill already nudges near £16,000 which is eye wateringly expensive. Anyone I know who has undergone IVF has either paid for it themselves or received it for free, but what about, and this is something I’d not really considered before, those who simply live in the wrong area, or who are denied treatment? What are they supposed to do? 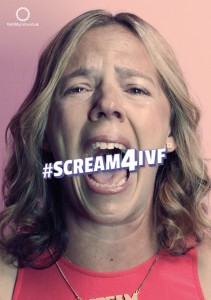 Here in the UK, 3.5 million people – or 1 in 6 couples – are affected by the devastation and pain that fertility issues wreak. Yet most local health authorities unfairly deny couples the medically recommended fertility treatment, so how can we speak up for these people? On Thursday September 6th, the UK charity Fertility Network, in collaboration with London-based creative agency Saatchi & Saatchi Wellness, launched a campaign to right this wrong. #Scream4IVF is a campaign for fair access to IVF in the UK. It asks the British public to donate their SCREAM on social media. The campaign is aiming to give a voice to couples with fertility problems so that their frustrations can be heard. Fertility Network aims to collect 100,000 signatures in an online petition (currently standing at 68,000) so that the issue of unfair IVF access can be debated in the Houses of Parliament. The screams will be collated to form THE WORLD’S LONGEST SCREAM FOR IVF, to be played at a rally outside Parliament on Wednesday October 10.

Why scream?
“The scale of damage infertility wreaks is vast,” says Aileen Feeney, Fertility Network’s Chief Executive. “It can destroy relationships, lead to serious mental health problems, create social isolation, and cripple people financially. Facing a life without the children you long for means screaming in pain, despair, frustration, desperation, and rage. But these screams of infertility are not being heard. This suffering is in silence.”

In what way is current access to IVF unfair?
In England, Wales, and Northern Ireland, access to NHS fertility treatment is determined by where a couple lives, or by their social circumstances – eg, whether one of the couple has a child from a previous relationship. 98% of England’s NHS services and all of Wales and Northern Ireland unfairly ration IVF treatment. By contrast, in Scotland, all eligible couples have access to the recommended fertility treatment of three full IVF cycles, including access for couples in which one person has a child from a previous relationship.  “In England, Wales, and Northern Ireland, couples struggling with fertility problems face an unethical and unfair postcode lottery to get access to IVF,” says Anya Sizer, Fertility Network’s Regional Organiser London. “Some couples are forced to spend their life savings or re-mortgage their house to fund private treatment. Those who can’t afford it but who still want to try for a family either have to move to an area that does enable access to NHS fertility treatment or have to travel abroad for treatment. It’s simply unfair – treatment for the disease of infertility should not be determined by your postcode.”

Why is the recommended treatment important?
The National Institute for Health and Care Excellence (NICE), the UK’s chief health advisory body, recommends three full cycles of IVF as the treatment for infertility. This recommended treatment increases the chances of a successful pregnancy by up to 53%.  The consequences of infertility include serious mental health problems, with associated long-term financial costs to the NHS.  “England was the pioneer in developing IVF,” says Feeney. “However, that achievement means far less if only those who can afford to pay for private fertility treatment benefit from this life-changing technology. The scale of disinvestment in NHS fertility services is at its worst since NICE introduced national fertility guidelines in 2004. The Government should be ashamed that, after 40 years of IVF, it is your postcode and your pay packet, and not your medical need, that are the key determinants of whether you will be able to try IVF. We urge them to take action now to change this.” Sam Petyan, General Manager of Saatchi & Saatchi Wellness, said: “This is a campaign close to our hearts – we just had to help. People with infertility are suffering in silence. I’m confident that decision-makers in Westminster will empathise with their plight once they see how strongly people feel about this.”