I have had eczema, specifically around my mouth for as long as I can remember. I call it my clown-mouth as it usually transpires as red marks at the corners of my mouth, a la clown. It doesn’t help that I also have a tiny car and giant shoes. I occasionally have a bit of irritation in the creases of my arms too but it’s my mouth that has always borne the brunt of the problem. Despite being able to pile on makeup in my teens and twenties with a trowel, I can’t now so much as look at a beautiful lipstick without my mouth prickling in irritation. It lets me apply a very gentle lip balm and that is it thank you very much! My mouth is a sensitive soul, let’s put it that way. 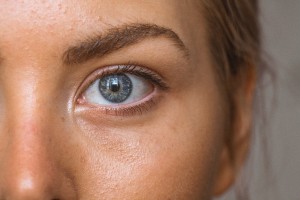 My eczema started when I was about ten. It continued in my teens, faded a little in my twenties and early thirties, then flared really badly after the birth of my daughter. This last flare-up happened to coincide with my periods returning. This was the worst it has ever been. I had dry, sore, red skin all around my mouth and red patches underneath both eyes. When this happened I sought help from a skin consultant and an allergy specialist. The allergy testing proved fruitless and I was told by Mr Specialist that it wasn’t possible to gain allergies or intolerances later in life. However through my own investigation (Agatha Christie style) I worked out that the irritation was down to banana’s. When I cut them out of my diet this particular reaction completely calmed.

Nowadays sometimes my mouth is bad and the clown-mouth appears, but it can also go for weeks with no real issue. It is without fail, constantly dry and I have to apply lip balm almost hourly otherwise my mouth seemingly shrivels up like a prune.  I am aware that certain foods trigger my eczema. This usually means I’ll have maybe a day or so of bad symptoms, comprising of the clown mouth at the corners (or just one side) and sore, dry lips. I have a steroid cream that I use sparingly. However just before Christmas my mouth irritation started to become a permanent fixture. I had a red mark at one corner of my mouth and just pure dryness the other. I also suddenly had an itchy, dry patch on my forehead (it was a most excellent look) These symptoms persisted for a while, then during February and March both massively ramped up gear. My forehead itched like crazy and at times my mouth felt like it was on fire. Fizzing with a feeling of pins and needles all around my lips and at one point I had tiny bumps all over my mouth, with a layer of scab like skin. I know, hot. Initially I put my mouth issue down to wearing face masks and the forehead patch down to wearing a bobble hat almost daily because our winter was so goddamn cold, but I decided to keep a food diary to see if I could pinpoint anything that was the root cause.

It transpires that I have quite a few trigger foods. Yay! The things that make my mouth sore are: Sweet chilli sauce and siracha (or anything spicy/chilli), salted popcorn, soy sauce, sauerkraut, tomatoes/tomato sauce in anything (which is a tricky one as we eat a lot of tomato based sauces!) pesto and citrus fruits. Once or twice after having either eggs or coffee my mouth has been itchy but at other times having either, it hasn’t reacted at all so this is a sporadic one. I also discovered when keeping this diary that I have an intolerance to dried coconut. When I eat this my inside of my mouth itches like crazy, although I’m fine with coconut milk or yogurt. The main thing to mention here is that two days into keeping the food diary I had to stop eating banana’s for a hormone test I was doing for fertility stuff (despite finding that they made my skin react when I had the bad flare up back in 2015, I reintroduced them with no issue) I cut them out and after two weeks the irritation I was having around my mouth completely calmed and my forehead patch cleared. My forehead friend did make a reappearance after a week or so, but then vanished again and as of now, has gone.

Now, this flare up could have been a combination of things. The freezing cold UK winter, face masks, bobble hats, a new face oil I introduced (despite completely avoiding my mouth and forehead friend) AND possibly then the banana’s? I will never really know. When I had the original flare up back in 2015 I thought it was a one-off random situation, it would seem perhaps not. It certainly looks like the pesky banana had something to do with it this time. Google tells me that Banana intolerances are extremely rare (typical me) and that they occur when the body incorrectly identifies the proteins as foreign. ‘When small particles of food escape through the gut wall into the bloodstream, the body sees these particles as a threat and sends out antibodies to fight them’. This triggers an inflammatory response – and for me this was on my face! Marvellous. I did try to tentatively reintroduce banana’s again when this flare-up calmed down but funnily enough my forehead started itching again in the same spot. So it seems for now, they need to be occasionally consumed, not daily. Cue Minion voice, BANANA!