When I was little, I loved sport. I did classic activities like ballet, horse riding and tennis and at school I loved rounders and netball. I was obsessed with horses and was lucky enough to have my own and I played tennis every Friday night. My older brother made me play endless hours of cricket and rugby. I spent many an hour in the garden either having cricket or rugby balls thrown at me, being tackled to the ground or learning to spin pass. I vividly remember laughing hysterically playing badminton in the garden – it’s funny when the shuttlecock gets stuck in the racquet, no?! However outside of garden games, the reality was that the two main hobbies I did, riding and tennis were actually quite solitary sports. I often spent weekends on my own at the stables because people went at odd hours to do their horses and playing tennis, we regularly played singles matches, so I never had that feeling of being in a ‘team’. When my teenage years hit, unsurprisingly I started to find these solo sports rather boring. This, coupled with a move to a new school for sixth form and the freedom that I was given, meant that my previous love of sport went out of the window. No longer made to do it as a compulsory lesson, I stopped completely. With my sports mad brother at University and no more garden games, the tennis club was ditched and my lovely horse was sold. Given the option to be lazy, I quite happily took it. 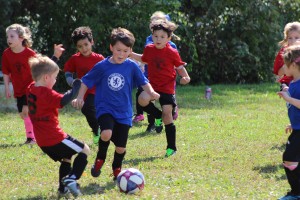 I was a typical Kevin the teenager, my mantra being, ‘it’s so unfair!’ After giving up sport, I simply didn’t do anything else. I had no commitments. Weekends were mine to just to hang around with friends, which obviously was fun but I had no drive whatsoever. This theme continued on to university and well into my twenties, where the only exercise I got was lifting the TV remote or a pint of beer. My bone-idleness stuck with me until finally in my late twenties, I got my lazy behind out running one day. This was also around the time I met my husband. He played hockey and had done so since his teens. Seeing him off having fun every weekend meant that I eventually I got bored of being on my own on a Saturday, so decided to also join a local club. Playing a team sport like that now, I wish I had joined a team when I was at University, how much fun would that have been! I feel had I been taking part in team or group activities from a young age, then this might have carried on into my teen years and changed my attitude somewhat. Perhaps given me a little bit more focus or made me that touch less selfish.

Thinking about hockey and seeing the youngsters (makes me sound 100) playing too, I can totally see what you would get from it, taking it up as a child. There are the obvious skills, but also the team work, the support, encouragement, respect and selflessness. There is also the need to understand that there are always winners and losers to games and how to manage the emotions around this. This theme would continue for football, netball, dodgeball, rugby etc, so many sports. I think of the sort of person I want my daughter to become. I have many hopes for her, but one thing that I believe is, is that if she is involved in and playing sport, she will hopefully have instilled in core values. I read this great article that quotes, ‘Team sport, team activities and team challenges are as important to young people’s development and future success as any academic qualification. We must teach children to understand that we all make mistakes and that we are at our strongest when we show empathy and compassion to those around us. Equally we must teach them the resolve to come back from mistakes and the ability to learn from them so that we are stronger and better.’ There are so many emotions that happen in sport, joy and elation quickly turned into frustration or anger. If children can learn to deal with these emotions early on then it will help set them up for life. And if they can share these emotions with their team or class mates, and try to support each other or console or celebrate then these are valuable lessons.

I hope if my daughter is taking part in team sports then she will learn that sense of camaraderie and fun that comes with being amongst others all doing the same thing. She will learn about supporting one another, both on and off the pitch. These are all things I would love her to learn and experience.

6 thoughts on “Is Team Sport Important For Children?”