Alcohol has always been a big part of my life for as long as I can (hazily) remember. It’s always been there, lurking in the background, at every family event, every BBQ, every nightclub, every wedding. A night out wouldn’t be complete without a drink in my hand. I can remember various booze related things growing up. I remember having sips of my dad’s beer when I was little, and sips of wine on holidays, I remember one Xmas Eve with family friends when I was about fourteen or fifteen, my siblings and friends children got me rather drunk, my dad had to help me walk home and I had my first hangover the next day – it was horrific, but clearly didn’t put me off. I remember my mum picking me up from a pub where I’d been with older friends and had promised not to drink. My wobbly bambi legs gave me away, that and the fact that I fell through the open front door. My teenage years meant underage drinking – always cider round the friends house whose parents would let us drink. Then there was drinking in the pubs we got served in and there was the raiding of drinks cabinets to take concoctions out in plastic bottles. Then there was university and my twenties, boxes of punch, shots, wrestling – but that’s another story altogether. It’s all been a rather wonderful, boozy cycle. 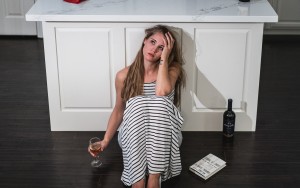 For a while now I’ve felt uncomfortable about my drinking. I’m talking weekend drinking by the way, I tend not to drink mid-week. OK maybe wine on a Thursday but then just Saturday, so it’s not excessive in that sense. My issue is the amount I consume in a sitting. I get over-excited, I’m OUT, wahooo! Child Free!! My main aim is a simple one. Inhale as much alcohol as possible before it’s time to go. It’s this inability to find my off-switch, to go home at 11pm, to say ‘no thank you’ to that next drink, that I’ve been struggling with. And I’ve really found myself struggling especially because we are having fertility issues. Anything you read about fertility and booze, basically says STOP DRINKING YOU IDIOT. And yep, that’s kinda how I’ve been feeling the day after, like a total idiot. I internally self-flagellate and hate myself for getting into drunken states, which I have done recently at birthday bashes, hockey drinks etc, when I really should be trying to give my body every chance. I hate myself the next day and that kind of self-loathing really isn’t worth it at. I constantly say to myself, what do I want more, a baby, or another drink? And I always choose the baby option, obviously, but I’ve still been unable to stop drinking altogether.

Whilst I’ve always stopped drinking when we’ve undertaken any IVF treatment and obviously when I was pregnant, I’ve carried on drinking around these milestones, and it’s this attitude that has been frustrating me. Why can’t I just have a break from drinking? It’s not like I don’t know what I’m missing out on? It’s hard because I always see, say wine for example, as a reward of sorts, A treat for a difficult day with Olivia, or for making it to Friday unscathed without loosing my shit. Then drinks after hockey are a reward obviously for playing sport, and then if it’s my turn to stay out and the husband has Olivia, then it’s QUICK DRINK AS MUCH AS YOU CAN BEFORE HE MAKES YOU GO HOME. That’s the mentality I’m dealing with here. I’m basically like a child around sweets. Rolls eyes.

So, I’ve been skirting around this predicament for about two years now, when I saw a little blue book being touted on Social Media. It’s called The Unexpected Joy of Being Sober, and whilst my drinking is no where near as bad as the authors was (secret drinking mouthwash, beers hidden in the cistern etc) I recognised a lot of her back story about drinking in her early/late twenties and certainly her alcohol related blackouts rang alarmingly true. The book made me think about all my drinking incidents where I’ve been embarrassed the next day (far too many to mention) It made me think about why I need that drink, why do I need that so-called reward? Would it be so bad not to drink on a night out? It made me question lots of things, it made me think about what we say to people when they tell us they’re not drinking, ‘Oh that’s a shame’, ‘how boring’ etc, that’s the mind-set we have as ‘drinkers’. There is a lot of stigma around not drinking, when really, is it so bad not to drink? Certainly having done dry January before I know how good I felt at the weekends and how much better a parent I was, when I didn’t have a hangover. Go figure right? Reading the book was the simple bum-kick I needed to take some time out from boozing. I urge you to take a read if you’re thinking about wanting to take a break from drinking.

Since reading that book and to now, it’s been seven weeks. Seven whole weeks of not drinking. And while I have had a few here and there (like, three in total) I’ve remained about 99% sober and it feels really good. Funnily enough I’ve had some great sleeps and have found myself waking naturally early, rather than peeling myself out of bed after several visits from Olivia, heavy breathing at the side of my bed in the morning. Although, I have to caveat this post and mention that at the point of writing this I’m suffering from bronchitis, which has hugely effected my sleep and general well-being, but this aside, not drinking is making a difference in my life. I’ve managed our annual family Easter Sunday get-together, where I usually get plastered on champagne. Last year the husband had to stop the car for me to be sick at the road side (I know, classy) whereas this year I drove. I’ve managed a meal out with a friend and I was going to try my End of Season Dinner last night but was too ill, which I’m kind of relieved about given the amount of Jaeger that’s consumed. In all, I think reading the book and a combination of a want-to-do mind-set, have helped make this decision for me. This isn’t for the long-term by the way (hell no!) this is just a much needed break, and for now, I’m happy that I’ve made this change.

*UPDATE* I stayed booze free for 11 weeks. One of the main reasons for trying sobriety, that I didn’t mention in this post, was because we were trying another round of IVF. That didn’t work however, and the day I found out it hadn’t, I hit the booze hard (I think I consumed two bottles of wine, sobbing in my parents kitchen) Since then, I’ve been drinking quite a lot, my excuse being that I had gone so long without, and because nothing seems to be helping our fertility problems so why the heck not? Also, we’re living with my parents while work is done to our house and it’s very easy to drink as they have it in their house, whereas at home, normally we don’t so much. I’ve also just had a girls weekend away and obviously a lot of alcohol was consumed then. I am conscious however, that I’m drinking too much and I want to stop again. I’ve come to the conclusion that until we move back into our own home (end of July hopefully) then there is no point worrying about it, I’m giving myself this window as it were. Once we’re home I will try sobriety again and I’m actually looking forward to it. However, in all I am proud of myself for managing 11 whole weeks alcohol free, I’ve proved to myself that I CAN do it, so I know when the time comes, I’ll do it again.