I have spoken on here before about cutting back on or trying not to drink alcohol. My husband and I did Dry January in 2015, after feeling like we needed a reboot of sorts when I had my first chemical pregnancy. Cutting out the booze made us both feel really good, but we reverted back to our weekend drinking once this finished. I didn’t have alcohol during any fertility treatment that we did and I managed a milestone 11 weeks drink free when we did our final IVF round. But when that failed, I drowned my sorrows in wine. And I mean seriously drowned my sorrows. However, cutting back on or certainly not enjoying drinking, has been on my radar for a few years now. The reality is that it just isn’t as fun anymore. 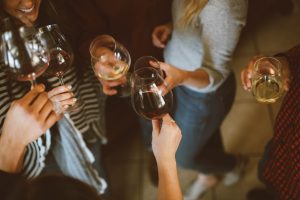 It’s probably worth flagging here that I have never been a, ‘Vodka on my cereal’, kind of drinker. Champagne the morning of a birthday or holiday why yes, but I’ve never drunk first thing, or disguised a drink as a cup of tea, hidden alcohol in sneaky places, or hidden bottles from my husband etc. That’s not the problem. My issue with drinking has always been two things, my tolerance levels (which are on the low side) and that when I have the chance to consume at a social gathering or family do for example, I drink quickly, I get over excited I suppose – I have never found my ‘off switch’. This often (always) results in a rapid downfall. Pair low tolerance with an ability to get plastered quickly and you have a disaster waiting to happen.

Drinking alcohol was the next step in my teenage years. There was never any thought of not doing it, everyone was! In my peer group, several parents would let us drink at their houses and one of the girls looked tall enough to pass for 18 (back when no one cared about serving underage) so we were always able to get alcohol easily. I drank copious amounts of booze when I went to university, this theme continuing into my twenties. There would be regular midweek pub meets with friends in London and big nights out (or in) at the weekends. When I met my husband and started playing hockey, there would of course be post-match drinks and regular club social events. There were also several big family holidays where again, alcohol played a key role. It was just part of my life. The very few people I encountered who didn’t drink, I genuinely didn’t understand it.

Then, in my early thirties out of nowhere I started to get post-drinking panic attacks. They materialised when we flew to a wedding in Poland, via Berlin. The trip involved a lot of travelling and a huge amount of drinking (vodka shots anyone?) My first happened when we were waiting to go to the top of the tallest building in Berlin, the TV Tower. Just before we got in the lift I went into meltdown. My heart rate increased, I started sweating and at the top of the tower (which rotates, marvellous) I thought the top was going to fall off. All completely irrational but bought on by my hangover and extreme tiredness. I had two more panic attacks on this trip and a huge one on the plane flying home, where I thought the bottom of the plane was going to fall off. From here on in, if I drank and then had to travel in any shape or form the next day, I experienced a panic attack.

When I had my daughter, a glass of wine became a reward. Like a winners cup. After a hard day dealing with the tyrannical small person, a cold glass of something felt hard earned. But I started to notice that even just two glasses of wine would leave me feeling fuzzy headed the next day. I tried to avoid big nights out, unsurprisingly they had become less appealing, but they still snuck in once in a while. At the time it would be great, but the mornings after started to become horrific. A new feeling of anxiety had begun to creep it’s way in amongst the pounding headaches and extreme tiredness. I would now wake in the early hours with whirling thoughts, ‘What happened after 9pm?? Did I bring my bag home?! Why did I do those shots??’ This started to make a fun night out completely exhausting if I was awake from 4am just thinking. Also the next day guilt when looking after a small person with a hangover (that’s me with the hangover, not the small person) is just horrible, so throw that into the mix why don’t you.

With our fertility issues, I began to read and understand how cutting back on alcohol could help, but something always held me back from stopping altogether. It comes back to a glass of wine being a release or reward. I managed to cut down on my intake but to stop myself from any excess drinking, the easiest thing to do was to remove myself from social events, as sad as that was. However I would allow myself the odd occasion to ‘big’ drink because I felt I deserved to, because of everything else I was cutting back on or missing out on. Of course then I’d over-do it and have to deal with how the alcohol made me feel the day after. It was a vicious circle. I have struggled with this balance of knowing I want to cut back or stop, but not being fully able to, for several years now.

For me, stopping drinking has been a slow burning process. It’s been happening in fits and spurts. What finally made me sit up and realise I had to commit, my catalyst as it were, was when my Dad passed away during lockdown. We knew it was going to happen but that doesn’t make it any easier. There was a post-funeral gathering late summer (restrictions abided by), followed by another get together on what would have been his birthday. I felt I had the right to drink to excess because I had lost someone, but my body and mind obviously didn’t give me a break the next day. I found myself feeling mentally awful after both events. I literally couldn’t handle how the alcohol made me feel the day after when grief was added to the mix. Soon after this, I worked with a Fertility Nutritionist and got back to healthy eating, after a lot of lockdown takeaways and I completely stopped drinking. Weirdly I think Dad dying gave me the focus I needed. But as we hit Winter and were put into the tier systems, my mid-week tipples started to creep in without even realising (shields eyes from the bottle) A few gins on a Thursday, leading into the weekend etc. Then being hit with Christmas being cancelled was an absolute killer (my first one without Dad) This meant that I massively overdid the drinking because everything felt so sad and weird.

Post Christmas I got back into fitness, having been a static potato for months and I finally recognised the pattern I’d fallen into of casual drinking. I stopped the midweek Gin’s and also cut back at the weekends too. I actually found being in lockdown (Again! Ha!) made this easier as there were no social events. When things began to open up, over the summer there were a few gatherings and despite not wanting to drink, I just couldn’t stop myself (again, it’s that thinking of ‘it’s a reward/you deserve’ it notion). What gave me the second push I needed, was a mildly boozy get together with friends where I didn’t even drink that much, but slept horrendously and woke feeling awful. I was so cross with myself. How I felt the next day just wasn’t worth it anymore. From this point on I managed 11 weeks without a drop of alcohol. I genuinely didn’t want to drink.

We went away during the October half-term (god it felt good to leave the country), which I knew would be a test of sorts. However, I gave myself a break – in making this decision, I wasn’t or am not aiming for complete sobriety, I just needed to find that elusive ‘off-switch’. I didn’t have a drink at the airport or on the plane, which was a massive milestone for me, as holiday drinking has previously always started on the day of travel. Whilst away, I had a few drinks but really not much. I came home feeling rather pleased with myself and (un) surprisingly rested! However Christmas for me was always going to be a tricksy one. It’s my birthday and I’ve always struggled with being a Christmas baby, I don’t really know why. And for me now, it marks the end of another year where I am not pregnant. It’s like a painful milestone. After buckets of champagne I am usually a weeping mess in the corner come 6pm. To give myself credit, my intake this time was vastly reduced however, I still overdid it. I’m filing this one away and calling it, ‘Work in progress’.

If you’re still with me, well done for getting this far and if you’re not, I don’t blame you! I had a lot to say. Having drunk since my teens this was always going to be a big thing for me. It’s obvious to me now that alcohol gave me confidence when I was younger, being someone who was shy, awkward and embarrassed about her appearance. It made me someone else when I drank. To be honest, it’s only having been on this messed up fertility journey that has lead me to feel how I feel now about drinking. I’m noticing that I feel more myself when I don’t drink. I feel happier, can converse clearly and remember everything. Crazy eh. There haven’t been any wild epiphanies yet, my skin hasn’t glowed (ffs) and my sleep hasn’t improved (I blame the kid and the snoring husband) but I know I am doing the right thing for me, which is hugely important. I genuinely feel better at the weekends, not waking up with alcohol induced anxiety. Slight Christmas excess aside, I’m back in a good place. Here’s to a Happy and Sober (ish) 2022.