I have had eczema for as long as I can remember, mainly around my mouth but occasionally on my arms too. Various things can cause it to react, but the usual suspects are when the seasons change, when I use lots of sun cream or when I eat spicy food. I’ve never given it a second thought, when using the strong steroid cream I’ve always been prescribed by my Doctor on the red patches that I get. I call these red patches around my mouth, my clown mouth, because that’s basically what I look like. I know, sexy! Over the years I’ve managed to keep it under control with the use of the steroid cream and other than a few bad occurrences, its been kept in check, that is until now. The eczema around my mouth often eases in the summer and triggers when the weather gets colder, so it flared as it usually does when November/December hit and I began applying my cream as usual. I try not to use it too much as my Doctor does warns me that it can thin your skin but without thinking, I was definetly overdoing it as in my mind, it gets rid of it, right? This time round however something was going on, my clown mouth wasn’t clearing. Over the Christmas period it got gradually worse until I woke up on Boxing Day looking a bit like the joker, with an exaggerated red rash at both sides of my mouth and small cuts appearing whenever I smiled. This combined with a hangover made for a fairly horrific day! 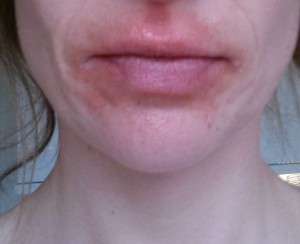 My Dad commented that he thought I had something called Angular Cheilitis, a sign being the cuts at the corner of my mouth. He suggested an over the counter cream called Daktarin Oral gel. By this point I had realised that my steroid cream wasn’t working and I stopped using that altogether. I began googling (thank god for the internet) to try and find suggestions to fix this and decided to go with: Bathe the corners of my mouth with salt water (that bloody hurt) liberally apply Daktarin gel all round my mouth, drink Apple Cider Vinegar and cry (not necessarily in this order). To my horror, despite taking these measures the rash continued to get worse. It spread even further around my mouth and along with that I was getting tiny little spots/bumps filled with clear liquid which when broken, crusted into a sort of orange crust, basically it looked horrific. I found some more information online about something called Perioral Dermatitis. Web MD describes this as ‘a facial rash that causes bumps to develop around the mouth. In some cases, a similar rash may appear around the eyes, nose, or forehead. The condition is most commonly seen in young women (90% of cases), but it can affect men as well.’ And shock horror, this is caused (or can be caused) by over use of topical steroid creams! Yikes!! I was gutted, in all my trips to the Doctor, aside from telling me about it possibly thinning skin I have never been told about this other, unattractive side effect! Perioral Dermatitis can also be caused by the overuse of make up and lip balm and recently I had been trying different makeups on my chin, around my nose and I had definitely been overusing my lip balm. Basically I created my own, terrifying face monster.

Once I found out what the rash was, I stopped using EVERTHING that I’d been putting on my face and I went and spent a lot of money on vitamins, after reading lots online about how supplements could help. I bought: Evening Primrose Oil, Zinc, Vitabiotics Immunace, Bio-Kult Probiotic and Oregano Oil tablets. I have been taking these for a month now and I honestly don’t think they are doing anything, hilarious! BUT I will keep taking them to at least finish the packets and to at least try and justify the money I spent. Bizarrely, despite looking like I did, it took me a while to make a Doctors appointment because I was hoping it was disappear (fool) but I finally saw my GP early in the New Year. She prescribed me with a course of antibiotics called Oxytetracycline, for three months, I baulked at the length of time but she was adamant this was required to clear everything up. After taking the tablets for a day or so, thankfully my face started to clear up , everything started to dry out and the rash started to dry up and recede. 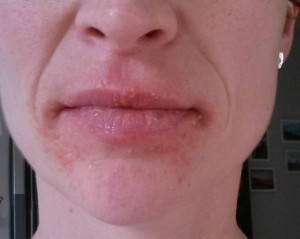 Oh but hooold on, waaait a minute!! It wasn’t finished with me yet!! A few days after the above photo was taken it started to come back. Wonderful. My mouth started to look sore again and the little spots reappeared, plus, to top it all off, because I didn’t look bad enough already, a red rash started appearing around my eyes, dear god why! I became a hermit for the entire month of January, not leaving my house, hiding my face when answering the door and avoiding speaking to anyone not my husband. All in all, 2015 has been pretty rotten so far. I will continue to document my skin issues in another post, but I would love to hear from you if you experience similar problems too? If you use natural products on your skin I’d love to know about them?