I don’t know about you but I feel like I’ve had a hectic few weeks despite not really doing anything. It’s this time of year I think, everything seems to come to a head at the end of twelve long months. We’ve had coughs, colds, teething, sleepless nights, fertility drugs side effects and slow realisations that I’m going to be thirty eight in less than two weeks (sobs). The kid has had permanent snot face since she started nursery in September (the joy of shared germs) And teething hit her hard a few weeks ago. This lead to a stint of interrupted sleep, traipsing the corridor back and forth in the small hours between her room and ours, running on mumbie mode (zombie mum). Everything then came to a head and I found myself weeping down the phone to my mum, wine in hand. To help me get out of this funk, I’ve tried where possible, a few simple things that help me relax. 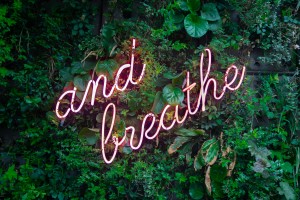 There is lots of talk about being,’ mindful’. Being mindful means being in the moment, switching off your mind to all other thoughts, cares or worries and being present in whatever you happen to be doing. But attempting this is pretty tricky if you have kids, especially if like mine, they shout a lot. How are you supposed to be ‘in the moment’ when your two year old has done a poo on the kitchen floor? Is it possible to ever switch off our thoughts? Well, yes sometimes it is. And the best way I’ve found to do this, is by trying meditation. This needs to be done when the kids are in bed, at nursery or whatever, but basically not when they’re in the vicinity. There are loads of APPs out there now for meditating. I’ve tried Calm but find Insight Timer much better and with far more variety. Depending what mood I’m in, I’ll choose something that’s just 5 or 10 minutes and then loads of options come up for you. Being kind to yourself, Gratitude practice etc, there are thousands! You DO have time to do this, don’t make excuses.

Taking time out to have a 20 minute nap. Now as crazy as this seems, this is a really hard one to do and has taken me years to allow myself the time to actually have a day nap!! I used to make so many excuses, no matter how tired I was. I had so much admin to do, washing to hang, the list goes on. But the world can wait while you lye down and recover. If I have had a bad night, I promise myself that next morning that I will have a nap. I have an early lunch then go and lye on top of my duvet (never underneath, toooo tempting!) with a thin blanket on me. I usually stick a 10 minute sleep meditation on and I allow myself this time to be still. Even if I don’t sleep, I’ve rested my body and honestly I do feel better for doing this.

Another thing that helps my state of mind, is being in the fresh air. With a busy two and a half year old, I need to get her out a lot (she’s akin to a small terrier) and actually when me and her have had a rough week, getting out just the two of us can really help us re-connect (sounds daft, but it’s true) After her teething hell week, I took her to one of our favourite National trust places and running around after her, climbing trees, rolling down hills (her, not me. Okay maybe me too) really made a difference to how I felt. Fresh air is like a natural elixir when you’re feeling stressed. It’s tricky at the moment because the weather is fairly dull, but when possible, standing in some open space, looking about can help give a momentary sense of peace (if you just dull out the children shouting)

Exercising can really help if you’re feeling stressed or a bit down. I have weekly hockey training, but often if I’m feeling a rubbish for whatever reason, I don’t want to go. I’ll think of every reason possible as to why I shouldn’t have to go, the weather, leaves on the pitch, unexpected item in the bagging area. But regardless, I always drag myself along and once I’m there I genuinely feel much better. Some of my fellow players who have stressful jobs, say that going to training makes then feel a lot more relaxed. Running about, chatting with your mates, sweating and generally not focusing on that thing that was making you stressed, helps to get rid of any ill feeling and gets things out of your system. There’s a science to it too. Exercise releases chemicals called endorphins. Endorphins trigger a positive feeling in the body, similar to that of morphine. So giving you a high, without the illegal bit. Boom-town.

A simple thing which doesn’t require much effort is switching your phone off at a certain time each evening. This is a hard one as if you’re like me, I’m constantly on my phone, checking twitter, instagram and various other things. I’m a bit addicted. My daughter often tells me when we’re out and about to, ‘PUT YOUR PHONE DOWN!’ which is a telling sign really isn’t it. I find this constant access to social media can add to any stress that I might be feeling, because I just don’t switch off at the end of the day. So more recently, come 8pm every evening I’ve been turning my phone off religiously. I find it forces me to listen to my husband (ha!) to watch that programme that I actually wanted to watch, or to pick up that magazine I’ve been meaning to read. It forces me to relax.

And last but not least is seeing friends. I always find that in stressful times, seeing some fellow mums, friends or family and having a good natter helps me de-stress no end. Offloading worries and concerns, maybe having a weep, talking about the crap week you’ve had over a cuppa and cake can really help. It’s true. Often I find by the end of a good chat, I feel like a weight has been lifted.

2 thoughts on “6 Simple Ways to Relax and De-Stress”